If you are looking for recent deaths from the Eugene and Lane County Oregon area – please click this link to the Register-Guard. The following names are from my first index I published and copyrighted about 20 years ago. I indexed deaths that were published in the Eugene Oregon newspapers prior to the start of the Oregon Death Index (1903). Only deaths with a Oregon connection were indexed. None of the dates overlap – see newspaper list below.
Oregon State Journal (Eugene OR): March 12, 1864 – December 1889 Eugene City Guard: January 1890 – December 1891 Daily Eugene Guard: January 1892 – June 1897 Eugene City Guard: July 1897 – February 4, 1899 Eugene Weekly Guard: February 11, 1899 – December 1902

Mrs. J.W. White died at her home in West Eugene Thursday morning, April 26, 1900, being aged 46 years.  Mrs. White was born in Green County Kentucky, in 1854 afterwards being taken with her parents to Illinois and thence to Kansas.  She was married to J.W. White in 1870 and moved to Oregon in 1893.

Mrs. White had a wide circle of friends in Eugene having been a member of the First Christian Church, and a prominent worker in several societies among which are  the Ladies of the G.A.R. and the Rebekahs, hence she leaves many who will mourn her death.

Hugh M [Marion] Walker died at the family residence at Springfield Tuesday morning after an illness of several months, aged 78 years, 3 months and 8 days.  Deceased was one of the best known pioneers of this state and county, having come here in 1858, and has resided in Eugene and Springfield continuously since that time.  He was born in Tennessee. January 2, 1833.  He leaves a wife and four children.  W.R Walker, Mrs. H. C. Harlow, Alf Walker and Bruce Walker.”  Oregon State Journal (Eugene) April 14, 1900, pg. 5, col. 5.

Find a Grave gives his year of birth as 1823, which calculates to the 78 years, rather than the obituary year of 1900.  Find a Grave also lists 6 children, 2 having died previous to his death.  William Robert Walker, Dillard Walker, Amanda Jane Walker Harlow, Sarah Fannie Walker Fuller, Carrie Walker Mount and Alfred S Walker.  No Bruce is mentioned? Sarah and Dillard, both passing before his death.

This is another good example that obituaries are secondary sources of information. The details and accuracy are sometimes lacking, but can be great spring boards to finding more information. GT 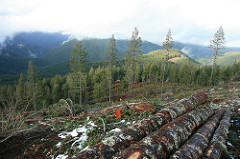 About 11 o’clock Tuesday morning John Higgins who has been in the employ of the Booth-Kelley Lumber Company felling logs near the Wendling mill, was struck by the limbs of a tree and injured, so that he died at 7 o’clock Wednesday morning.

In company with another man Higgins  was working  about two miles above the mill, and stepped on a log to await the falling of a tree which they had just chopped down.  Turning he saw that the limbs would strike him, and started to run along the log out of danger but was too late.  The limbs hit the man between the shoulders, knocking him down and an ax which was sticking in the log cut his arm quite severely.

It isn’t often that I can find nothing on an individual whose death was reported in the local paper. Given the short time the article said he had been in the area it only makes sense.  Perhaps some Higgins family is looking to whatever happened to John – and now they know.  Calculated death date would have been Wednesday April 18, 1900 and birth year about 1860.  GT 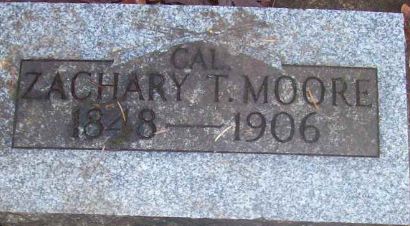 “Zachariah Moore died at Springfield, Friday evening, June 8, 1906, in his 59th year, having been born at Port Gibson, Mississippi, Jan 7, 1847.  He came to the Pacific Coast with his parent around Cape Horn in 1849 and lived some of the time in Oregon and in California.  “Zach” as he was called served awhile in the Navy and afterwards in the Army.  His father was a one-armed man, a machinist and sawmill man, and in early times had a steam planning mill in Eugene near where the present grist mill stands.  For a quarter of a century or more “Zach” has lived in Eugene and been a familiar figure around town, doing odd jobs, until recently he went  up to Springfield.  He was a bachelor and for many years “bached” in the city engine house on 11th street, taking care of the house for his lodgings.  He leaves two brothers, Wm. W. Moore of Eugene and Richard A. Moore of S[p]okane.”  Oregon State Journal (Eugene, OR), June 16, 1906, pg 5, col. 4.

See very informative article, “The Moore’s and Snodgrass’ of 1852, The Deckards of 1853″ by Willetta Moore Smith and Merle S Moore.

“The Portland Journal of Sept 5th contained pictures of two Eugene people and the following brief sketch: “Mr. and Mrs. J.H. Goodman, of Eugene Or., celebrated their sixtieth wedding anniversary August 29.  Both are natives of Kentucky.  Mr. Goodman was born May 14, 1823; Mrs. Goodman January 28, 1827.  They were married in Missouri in 1848; crossed the plains with ox teams in 1852, and located in Marion county near Scio; later they moved to Benton county, from there to Lane County in 1870, where they have since resided. They have had twelve children, five of who are living and were present at the celebration.  A.J. Goodman of Independence.  Mrs. Mary Hurst of Philomath, William B. Goodman, Mrs. Julia Day, Frank E. Goodman of Eugene.  Mr. Goodman’s brother John B. Goodman, and his wife of Corvallis, were also present.  The couple have sixteen grandchildren and eleven great grandchildren.” The Oregon State Journal (Eugene), Sep 12, 1903, pg. 5 col. 1.

I featured Mrs. Goodman’s obituary on my blog in 2012.  Both her and her husband are buried at the Masonic Cemetery in Eugene Oregon.  Find A Grave listing for Mr. Goodman also contains a copy of the news article for their 50th wedding anniversary! Find A Grave also contains an extensive linking for both the Goodman family and her Locker family.  Like the wedding article I recently posted, these articles can be critical  for finding more clues on your family.  Happy researching!

Mr. Walter E McClure of Seattle, was married to Miss Amy Grace Powell of Astoria [OR], in the Presbyterian Church of that city July 8.  Mr. McClure is a native of Eugene and graduate of the University of Oregon and he and all of his brothers were raised in Eugene, and several of the boys many years ago worked in the State Journal office.  Horace is now managing editor of the Seattle Post Intelligence.  Henry F. and Walter E. are lawyers and are doing a fine business at their offices in the Horten-Dexter bank building. They have a great run in examining titles to land after the abstracts are made.  Land has been sold so often in Seattle that an abstract cost from ten to fifty dollars, and after it has been made it must be examined and endorsed by McClure & McClure.  Miss Powell is also well and favorably known in Eugene, being a graduate of the State University under Prof Dunn.  The Journal joins with their many friends in Eugene in wishing them success and happiness.  Oregon State Journal (Eugene), July 11, 1903, pg. 5, col. 2.

Wedding articles can be a great source of information about your family.  If these were my relatives I would also check her home town paper in Astoria Oregon and the Seattle Post Intelligence.  Wedding articles often provide important clues on names of parents, siblings and where they are currently living.

Searching Find A Grave for the Seattle area, I find both Walter and Amy Grace at Lake

Amy Grace Powell McClure – died Dec 7, 1948, records show birth unknown – but the stone clearly shows 1869.  Walter A McClure 1868 – 1954.  Also on the stone is Henry Powell [McClure] 1904 – 1911 and David [McClure] 1910, both I assume were children of Amy and Walter McClure.  There is a large McClure stone surrounded by many other McClures.  Additional information about Amy – perhaps from the large family stone – “daughter of Henry Powell and Martha Brown wife of Walter McClure.”  Her parents are found buried at the Greenwood Cemetery in Astoria Oregon.  So the snowball continues to roll leading to more and more clues about this family and many more types of records that could now be searched.  If you haven’t looked for wedding articles for your family members you may be missing some valuable clues!